What errors could originate from the correlator spectral normalization and Tsys calibration? - Knowledgebase / Offline Data Reduction and/or CASA - ALMA Science

What errors could originate from the correlator spectral normalization and Tsys calibration?

A visibility amplitude calibration error originating in the combined effect of correlator spectral normalization and Tsys calibration has been discovered in ALMA interferometer observations (through cycle 7) of fields containing very strong astronomical emission.   This affects both 12m-array and Atacama Compact Array (ACA) observations, in somewhat different ways.   In general, this amplitude calibration error is proportional to the spectral profile of the single-dish (i.e., spatially-integrated within an antenna primary beam) total power of the astronomical target as a fraction of the total non-astronomical system temperature (atmosphere, electronics, etc.), and can exceed the expected uncertainties quoted in the ALMA Technical Handbook.  The effect can also limit imaging dynamic range.

Synthesis arrays like ALMA typically normalize the raw cross-correlation visibilities by a measure of total power (spectrally-integrated auto-correlations, traditionally) so as to produce effectively unitless (i.e., fractional) correlation coefficients, convenient for storage and transport.  In later calibration, a physically-meaningful scale is restored by multiplying by an independent measure of total power, usually in more convenient units, e.g., Kelvin.    Somewhat unconventionally, ALMA performs the visibility normalization at full spectral resolution (i.e., per channel), using the geometric mean of the auto-correlation spectra calculated for each antenna by the correlator.    This normalization strategy optimizes on-line calibration operations by rendering the channelized correlations with uniform apparent sensitivity on a unitless amplitude scale (per setting of channel bandwidth and integration time), and simplifies archive scaling and compression. However, if the science target field has very strong line and/or continuum emission, the effective amplitude scale of the visibility will be reduced in proportion to the spectrally-resolved fractional contribution made by the (astronomical) single-dish power in the target field.   Unfortunately, the Tsys measurements made by ALMA to reverse this normalization in calibration are not consistent with the normalization operation as follows:

1) (ACA and 12m array) The Tsys are measured off-source (i.e., slightly offset from the interferometry pointing direction, at approximately the same elevation), and therefore will not include the astronomical source contribution to total power that is detected by the auto-correlations used to normalize the data. Note that the off-source position for Tsys measurements do not have a unique field identification in CASA listobs output; they are identified with the associated calibrator or science target field, with a “CALIBRATE_ATMOSPHERE#OFF_SOURCE” intent. In the case of very large and complicated fields, this nominally off-source Tsys observing direction may not fall on empty sky and thus contain significant but different single-dish astronomical power than is detected by the autocorrelations.  Since the Tsys pointing direction has different sky coordinates as a function of time (being an offset mostly in azimuth), this spurious power contribution will vary with time, in general.

2a) (12m array & ACA prior to cycle 3) The Tsys are measured at lower spectral resolution than is typical for spectral line science, and will, in general, dilute any narrow line contribution, and thus cannot reverse the normalization performed at the full spectral resolution used for spectra line science (were it made on-source).  In this case, the spectral dilution will, in fact, tend to minimize the effect of any off-source astronomical power in the Tsys, except in very exceptional cases.

2b) (ACA only, cycle 3-7) Tsys are measured at the full spectral resolution of the visibility observations; in cases where significant off-source power is detected, the spectral profile of the Tsys will not correctly match the auto-correlation normalization spectra, and thus cannot correctly reverse the normalization.

The consequences of this amplitude scaling error are most notable for observations of strong, relatively narrow spectral lines (e.g., molecular lines, masers, etc.), that are easily detected in the auto-correlations of the spectral line science spectra windows.   In these cases, the spectral normalization will divide by auto-correlation spectra containing the lines, and the Tsys will calibrate with spectra not containing them.  The net effect is thus a systematic decrease in apparent flux density proportional to the single-dish line profile as a fraction of the non-astronomical total power. Note that it is the total single-dish power from the astronomical source that matters here, not merely the correlated power recovered by the interferometer.   E.g., for a mean off-line Tsys of ~100K and observations of a gaussian spectral line that contributes 10K (single-dish) at its peak, the net amplitude scale error will be zero off the line, but will increase to 10% (too low) at the peak.  This scale error will occur even if only a small fraction of the source’s 10K is recovered in the interferometry image. Since the net astronomical contribution to total power is a function of antenna (due to differences in efficiency and nominal Tsys), the amplitude scale error will contribute a systematic baseline-dependent noise contribution that will limit nominal imaging dynamic range.  Continuum sources in fields containing line emission sufficient to cause the scale error may spuriously show absorption. Note also that mosaics have a mosaic-field-dependent normalization, but are calibrated from single Tsys measurements interpolated in time.  For the ACA (cycles 3-7), where full-resolution Tsys may detect off-source line power with a different spectral profile than the science target pointing, the amplitude scale error will be somewhat more complicated.

The most reliable way to recognize if this problem affects your data is to determine if spectral lines are easily detected and evident in the autocorrelation spectra of the science target(s) in your observation.  Note that auto-correlation data are typically flagged by the pipeline, so plotting them requires explicitly opting to show flagged data in plotms. For ACA data (cycles 3-7), resolved lines may also be evident in the Tsys spectra, but since Tsys observations are made off-source where lines may not appear or are different, this is not as reliable a diagnostic as examining the auto-correlations directly. As such, detecting astronomical lines in the Tsys spectra is a sufficient condition for indicating likely vulnerability to this issue, but not a necessary one.

Observations of very strong continuum sources (e.g., solar) or very broad spectral lines not easily isolated in the auto-correlation spectra are also affected, but are more difficult to recognize or correct.   The net effect in continuum cases will be a systematic flux density error (downward) that will also tend to flatten any spectral slope within each spectral window.

Existing data (through cycle 7) affected by this issue (spectral line case) can be repaired post-facto by revising the effective normalization (using the recorded auto-correlation spectra) to exclude any lines detected in the auto-correlations, and flagging any astronomical lines that appear in the Tsys spectra (such that the relevant Tsys channels will be interpolated from line-free channels). In effect, the normalization and Tsys calibration are to be rendered agnostic with respect to astronomical lines. A python script implementing a normalization repair function (and including diagnostic functions and plots for visualization) suitable for execution in CASA on pipeline-processed data is currently being prepared.   A more complete analysis by the FAUST collaboration is also in progress.

Revised observing strategies for Tsys measurements in future observations are under consideration. 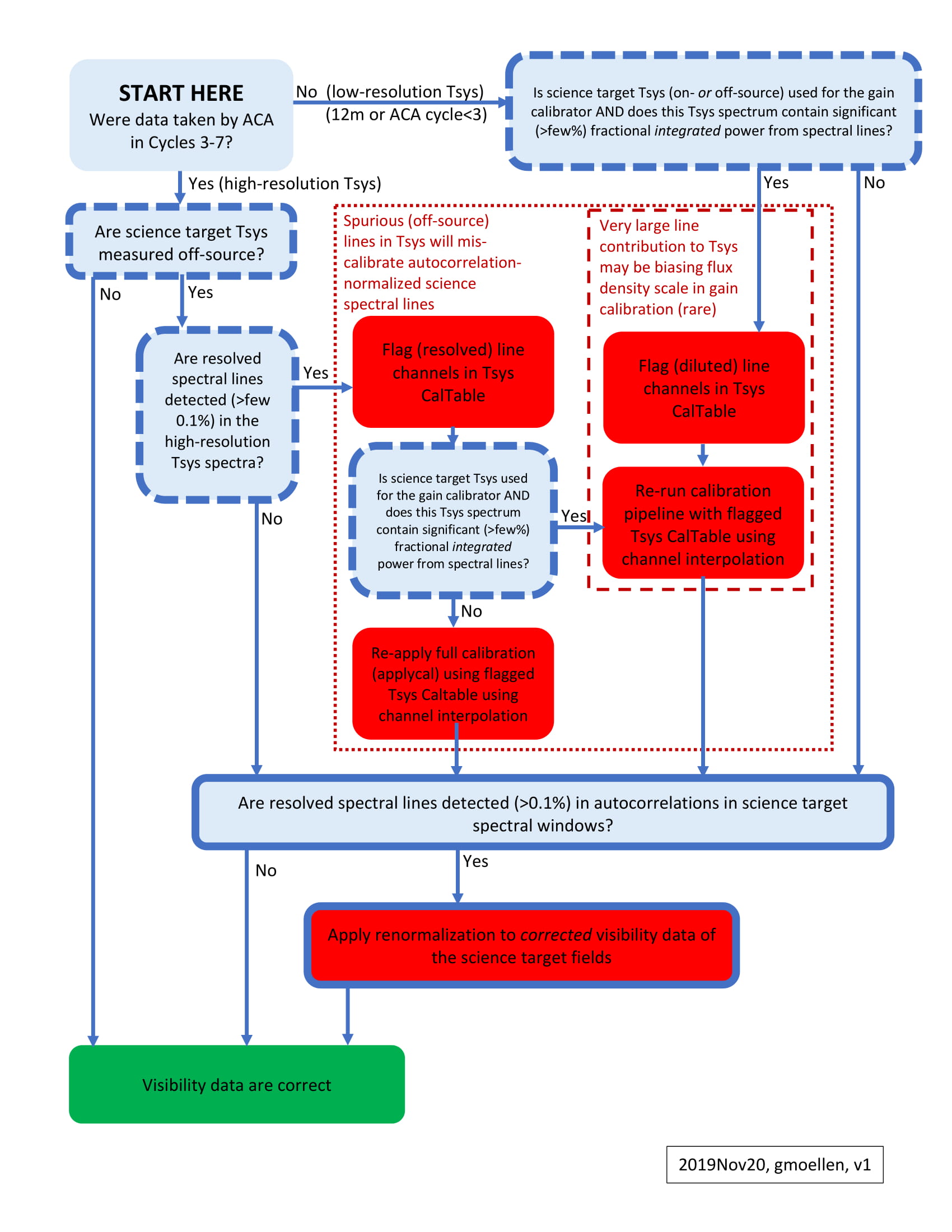